Our Lady of Almudena 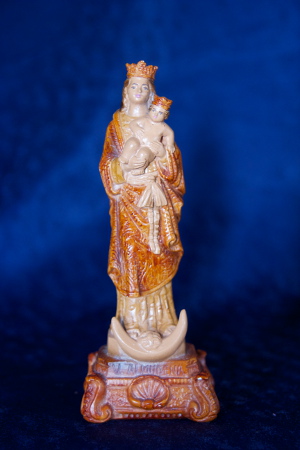 Our Lady of Almudena

Santa María la Real de La Almudena is a Catholic cathedral in Madrid. When the capital of Spain was transferred from Toledo to Madrid in 1561, the seat of the Church in Spain remained in Toledo; so the new capital – unusually for a Catholic country – had no cathedral. Plans were discussed as early as the 16th century to build a cathedral in Madrid dedicated to the Virgin of Almudena, but construction did not begin until 1879.

Francisco de Cubas, designed and directed the construction in a Gothic revival style. Construction ceased completely during the Spanish Civil War, and the project was abandoned until 1950, when Fernando Chueca Goitia adapted the plans of de Cubas to a baroque exterior to match the grey and white façade of the Palacio Real, which stands directly opposite. The cathedral was not completed until 1993, when it was consecrated by Pope John Paul II.

The devotion to Our Lady of Almudena, patroness of Madrid, began in the 11th century. Tradition tells us that when Dom Alfonso VI conquered Madrid in 1083, he immediately ordered the purification of the Church of Santa Maria, which had been profaned by the Moors. Since the statue of Our Lady, which the Apostle St. James had placed in that building in the early days of the Church, had disappeared, the King, together with the religious authorities, made a procession praying to Our Lord to help them find the statue. The pious cortege processed around the walls of the city, singing and praying. At a certain moment, part of the wall fell and they found the statue of Our Lady that had been hidden there for over 300 years. On either side of the statue were two candles – still lighted and burning – that Catholics had placed there in homage of the Virgin before closing the niche where they had hidden her statue. Almudena means market or granary, and this name was given to the statue because the place where it was hidden was near the Moorish granary.