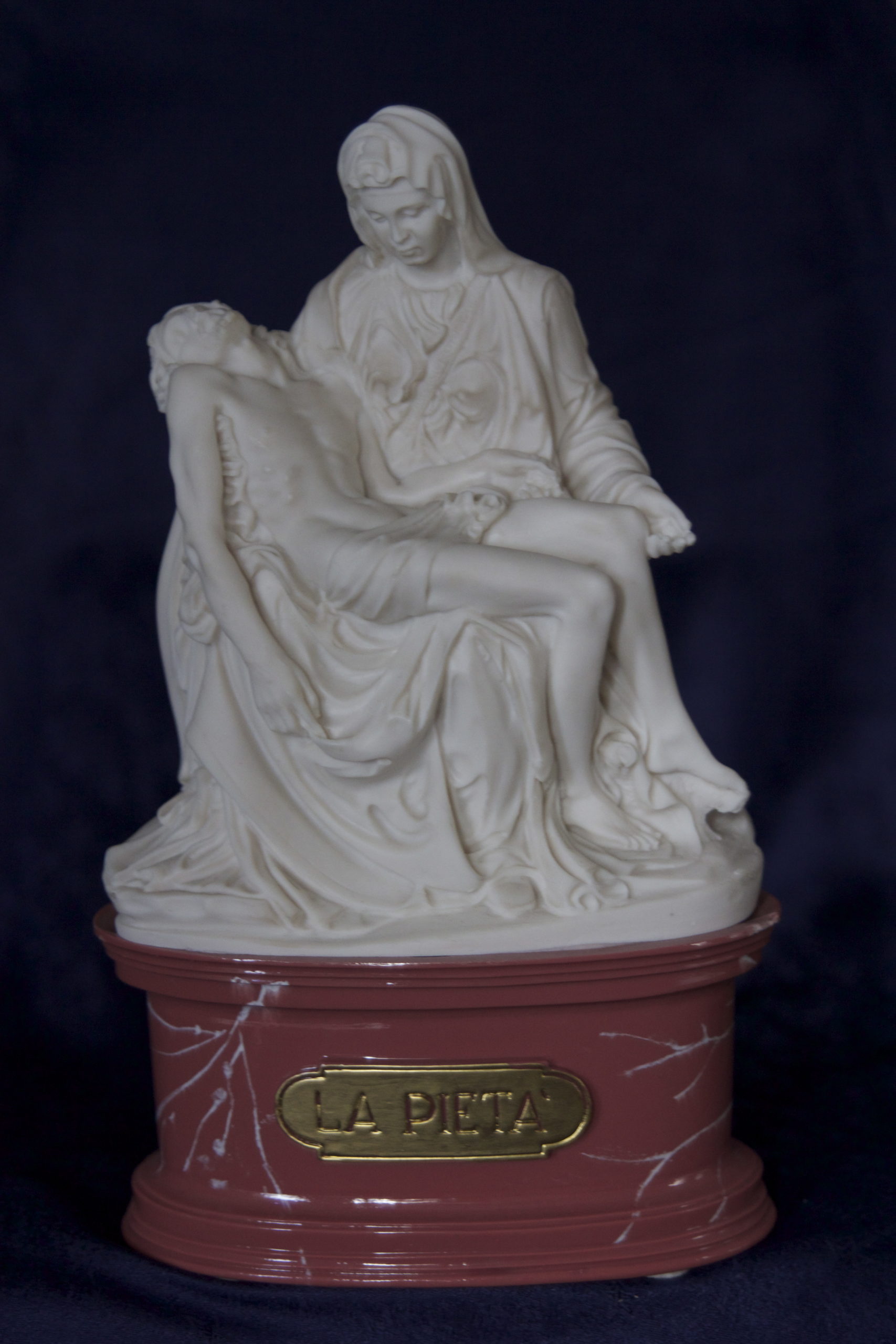 The Pieta (1498–1499) is a masterpiece of Renaissance sculpture by Michelangelo Buonarroti, housed in St. Peter’s Basilica in Vatican City. It is the first of a number of works of the same theme by the artist. The statue was commissioned for the French cardinal Jean de Billheres, who was a representative in Rome. The statue was made for the cardinal’s funeral monument, but was moved to its current location, the first chapel on the right as one enters the basilica, in the 18th century. It is the only piece Michelangelo ever signed.

This famous work of art depicts the body of Jesus on the lap of his mother Mary after the Crucifixion. The theme is of Northern origin, popular by that time in France but not yet in Italy. Michelangelo’s interpretation of the Pieta is unique to the precedents. It is an important work as it balances the Renaissance ideals of classical beauty with naturalism. The statue is one of the most highly finished works by Michelangelo. The structure is pyramidal, and the vertex coincides with Mary’s head. The statue widens progressively down the drapery of Mary’s dress, to the base, the rock of Golgotha. The figures are quite out of proportion, owing to the difficulty of depicting a fully-grown man cradled full-length in a woman’s lap. Much of Mary’s body is concealed by her monumental drapery, and the relationship of the figures appears quite natural. Michelangelo’s interpretation of the Pieta was far different from those previously created by other artists, as he sculpted a young and beautiful Mary rather than an older woman around 50 years of age.

The marks of the Crucifixion are limited to very small nail marks and an indication of the wound in Jesus’ side. Christ’s face does not reveal signs of The Passion. Michelangelo did not want his version of The Pieta to represent death, but rather to show the “religious vision of abandonment and a serene face of the Son”, thus the representation of the communion between man and God by the sanctification through Christ.

The Madonna is represented as being very young, and about this peculiarity there are different interpretations. One is that her youth symbolizes her incorruptible purity. Another explanation suggests that being that Christ is one of the three figures of Trinity, Mary would be his daughter, but it is also she who bore him. A third interpretation suggests that such freshness and flower of youth, besides being maintained in by natural means, were assisted by act of God. Yet another exposition posits that the viewer is actually looking at an image of Mary holding the baby Jesus. Mary’s youthful appearance and apparently serene facial expression, coupled with the position of the arms could suggest that she is seeing her child, while the viewer is seeing an image of the future. Finally, one modern interpretation suggests that the smaller size of Christ helps to illustrate his feebleness while in his state of death; no longer living, he now appears small in his mother’s arms.