Our Lady of Nuria 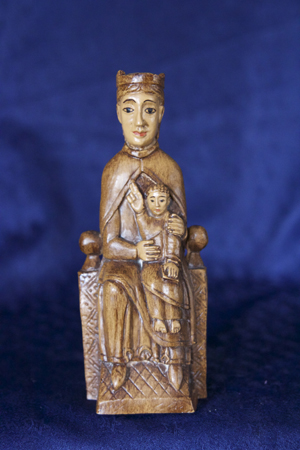 Our Lady of Nuria

The Valley of Núria is a south-opening valley coming down from the crest of the Pyrenees in Catalonia, Spain. The floor of the valley lies about 2000 metres above sea level, and is accessible from the south via a rack railway or by foot. There are no roads to access the valley. The place is historically notable for the 1931 drafting of the first Catalan Statute of Autonomy, in the Sanctuary of the Virgin of Núria.

Saint Giles arrived in the valley in approximately 700 AD and lived there for four years. He crafted an image of the Virgin Mary and later hid it in a cave when forced to flee from a Roman persecution against Christians. Along with the image of the Virgin, he left a pot used for cooking, a cross, and a bell for calling shepherds to meals. A pilgrim named Amadéu began searching for the image in 1072, after having a prophetic dream. He then built a small chapel for pilgrims, and found the image seven years later, next to the pot, the cross, and the bell, whereupon he brought the objects to the chapel to be venerated.

The image which is venerated at present has been dated to have been made during the twelfth or thirteenth century. It is a wooden Romanesque carving. The primitive-looking polychrome statue still retains its painting intact. The shepherds regarded this image of the Blessed Virgin as a patron saint of fertility. The canonical consecration of Our Lady of Núria was in 1965. Her feast day is September 8. The sculpture of the Madonna and Child which has been honored there for nearly 1000 years, and so understandably the name Núria for girls is particularly popular among families with connections to this region of Catalonia.