Our Lady of Chiquinquira 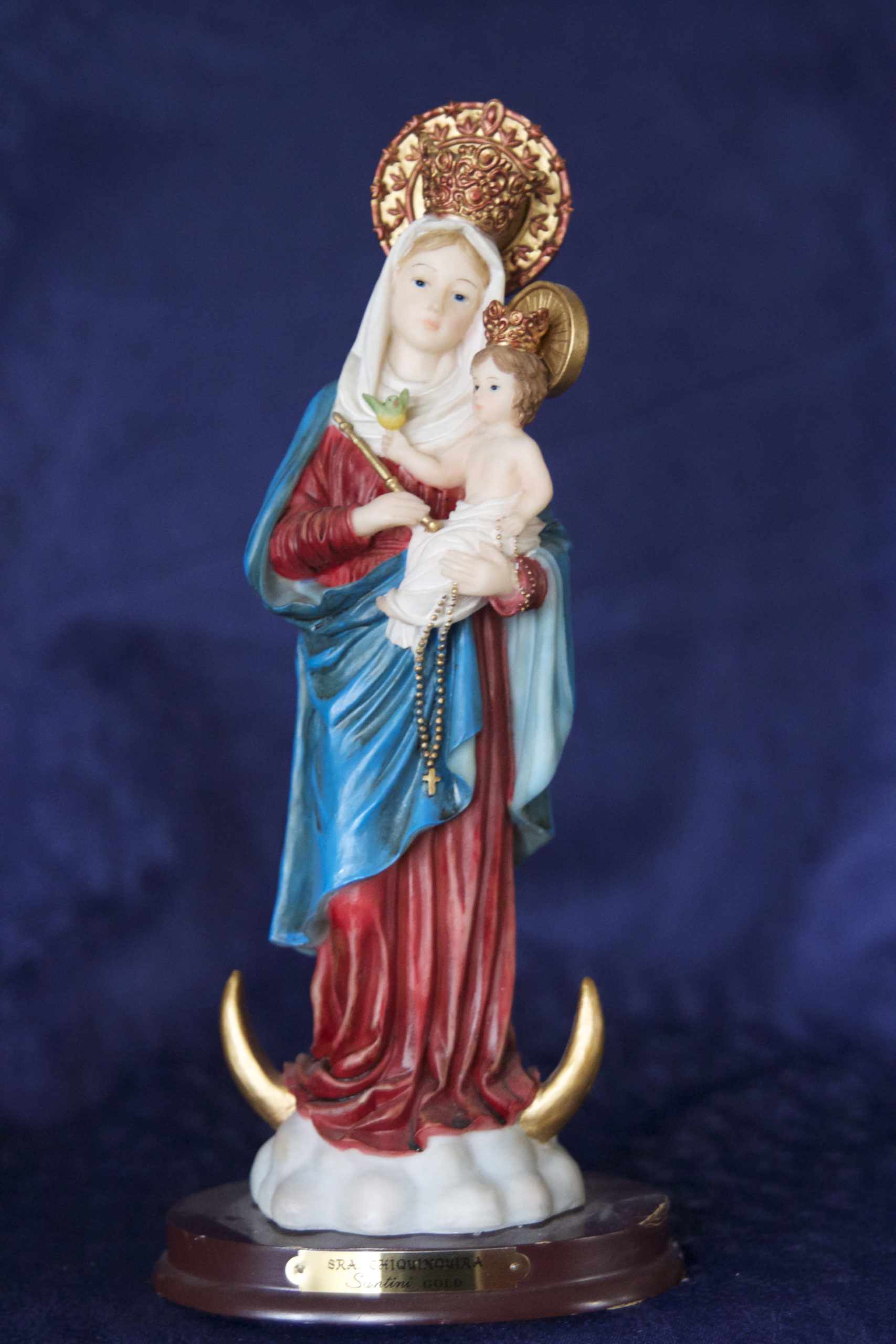 Our Lady of Chiquinquira

Our Lady of the Rosary of Chiquinquirá is a title given to the Blessed Virgin Mary in the northern Andean region of South America. She is the patron saint of Colombia, the Venezuelan state of Zulia, and the town of Caraz in Peru. In Colombia, her painted image rests in the Basílica of Our Lady of the Rosary in Chiquinquirá, where thousands of pilgrims arrive not only for the Feast Day on July 9, but also every Sunday, when they celebrate masses and processions. On July 3, 1986, Pope John Paul II visited the sanctuary and prayed for peace in Colombia at the feet of the Virgin Mary’s image. The title given to the Virgin is from the city of Chiquinquirá, where the first of the Virgin’s miraculous manifestations occurred, and where the original image from the sixteenth century is kept.

Alonso De Narvaez, a Spanish painter, painted a portrait of the Virgin of the Rosary on a homespun piece of cotton woven by Indians. To paint in tempera he used pigments taken from the soil and herb and flower juices of the region. The artist added the figures of St. Anthony of Padua and St. Andrew, apostle. These were the patron saints respectively of the Spanish colonist who had commissioned the painting and the monk who had ordered it. In 1562 the portrait was placed in a chapel with a roof that leaked, and in time the humidity, air and sun, had so damaged the painting that it was impossible to recognize. In 1577 the damaged painting was moved to Chiquinquirá and left abandoned in a room that had formerly been the family oratory. Eight years later, Maria Ramos, a pious woman from Seville, cleaned and straightened out the modest chapel and placed in it the faded canvas that had once had Mary’s image. Tradition has it that the prodigy took place on Friday, December 26, 1586. The image stood out again, having recovered its colors and brightness. The instantaneous process of restoration gradually closed the scratches and holes in the cloth, overlaying them with color and light.

The Virgin of the Rosary in the center of the painting is approximately three feet high. She looks towards the left as if to call attention to the nearly naked Child in her arms. The image has a calms countenance with a delicate smile. Both her face and the Child’s are pale. The Child has a little brightly colored bird tied to his thumb and a small rosary hangs from his left hand. Our Lady is supported by a crescent moon. A white hood covers her head and her rose colored robe is covered by a sky blue cape. With the little finger of her left hand she holds a rosary which hangs in front of her, and in her right hand she has a scepter.

The painting shows the marks of its previous deterioration. The figures appear blurred when looked at closely, but clearer at in a distance. For three hundred years the image of Our Lady of the Rosary of Chiquinquirá was exposed to the faithful without any protection, permitting thousands to touch the flimsy cloth. Since 1897 a thick glass protects the pointing from inclement weather and from excesses of pilgrim fervor.