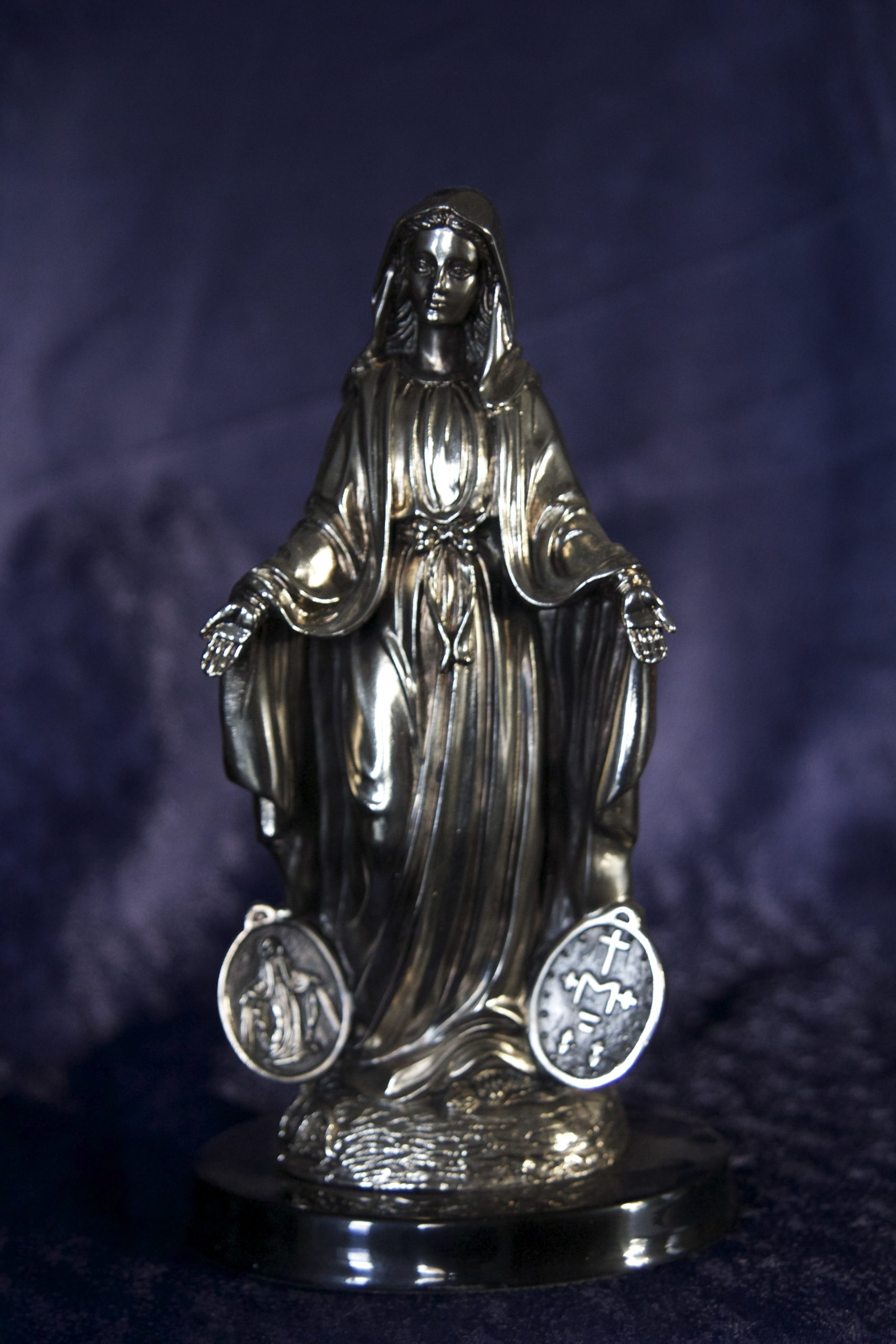 The Miraculous Medal, also known as the Medal of the Immaculate Conception, is a medal created by Saint Catherine Labouré following a vision of the Blessed Virgin Mary. Many Catholic Christians around the world (and some non-Catholics) wear the Miraculous Medal, which they believe will bring them special graces through the intercession of Mary if worn with faith and devotion at the hour of death. It is often worn together with the Brown Scapular. Such items of devotion are not charms and should not be construed as being either “magical” or superstitious (two conditions which are contrary to the teachings of the Catholic Church) but serve as constant physical reminders of devotion.

Saint Catherine Labouré stated that on the night of July 18, 1830, she awoke upon hearing a voice of a child calling her to the sisters’ chapel (located in the Rue du Bac, Paris), where she heard the Blessed Virgin Mary say to her, “God wishes to charge you with a mission. You will be contradicted, but do not fear; you will have the grace to do what is necessary. Tell your spiritual director all that passes within you. Times are evil in France and in the world.”

On November 27, 1830, Catherine reported that the Blessed Mother returned during evening meditations. She displayed herself inside an oval frame, standing upon a globe, wearing many rings of different colors, most of which shone rays of light over the globe. Around the margin of the frame appeared the words Ô Marie, conçue sans péché, priez pour nous qui avons recours à vous (in English, O Mary, conceived without sin, pray for us who have recourse to thee). As Catherine watched, the frame seemed to rotate, showing a circle of twelve stars, a large letter M surmounted by a cross, and the stylized Sacred Heart of Jesus crowned with thorns and Immaculate Heart of Mary pierced with a sword. Asked why some of her rings did not shed light, Mary reportedly replied, “Those are the graces for which people forget to ask.” Catherine then heard Mary ask her to take these images to her father confessor, telling him that they should be put on medallions, and saying “All who wear them will receive great graces.”

Catherine did so, and after two years’ of investigation and observation of Catherine’s normal daily behavior, thepriest took the information to his archbishop without revealing Catherine’s identity. The request was approved and medallions began to be produced. Those who wore the medal felt that they had received great blessings, and the medal came to be referred to as the “Miraculous Medal”. They proved to be popular, and the medals spread worldwide.

One of the most remarkable facts recorded in connection with the Miraculous Medal is the conversion of a Jew,Marie-Alphonse Ratisbonne of Strasburg, who had resisted the appeals of a friend to enter the Church. Alphonse Ratisbonne consented, somewhat reluctantly, to wear the medal, and being in Rome, he entered, by chance, the church of Saint Andrea delle Fratte and beheld in a vision the Blessed Virgin Mary exactly as she is represented on the medal; his conversion speedily followed.The chapel in which Saint Catherine experienced her visions is located at the mother house of the Daughters of Charity inParis. The incorrupt bodies of Saint Catherine Labouré and Saint Louise de Marillac, a co-founder of the Daughters of Charity, are interred in the chapel, which continues to receive daily visits from Catholic pilgrims today.