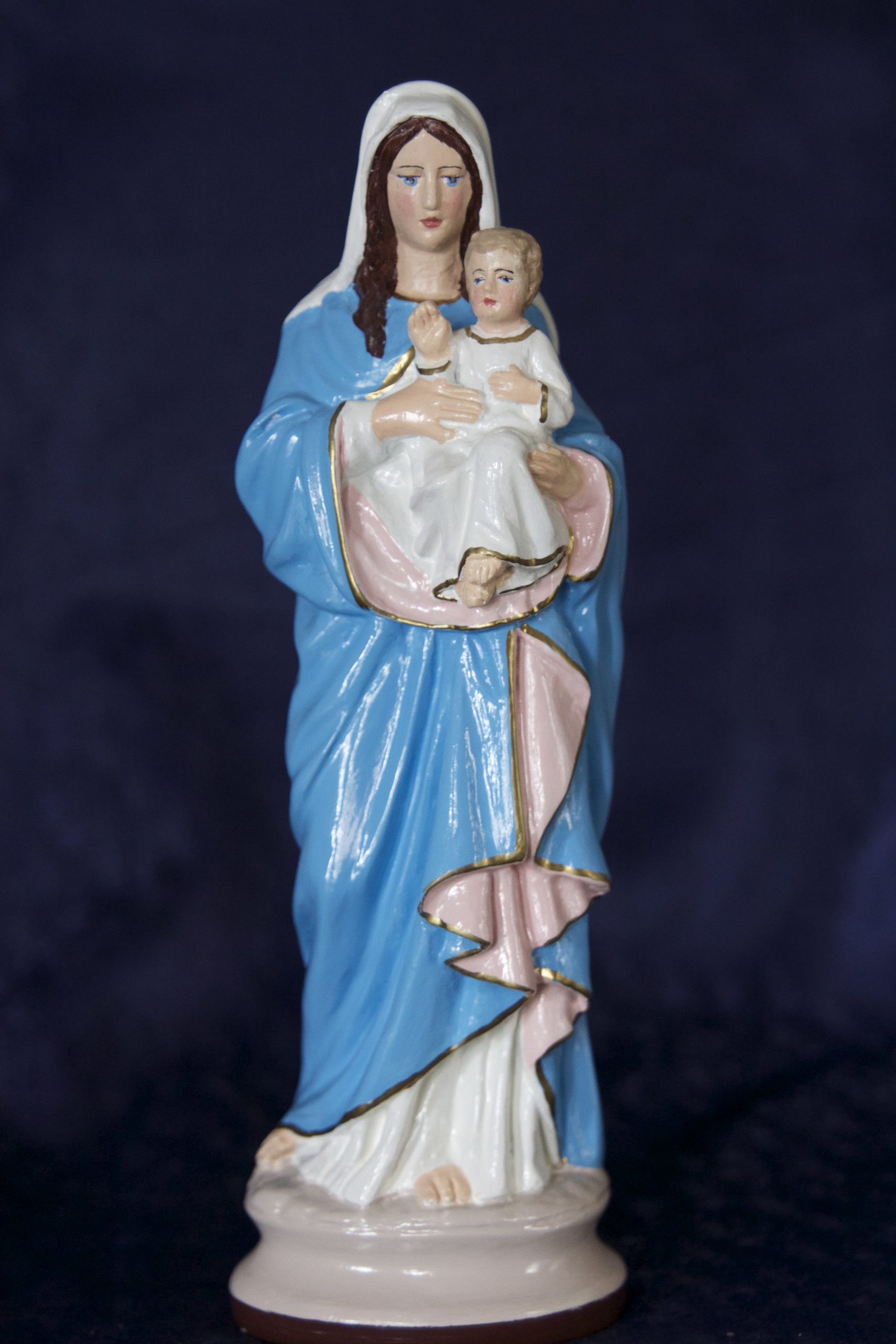 Our Lady of Šiluva is icon of the Virgin Mary in Šiluva, Lithuania. A Cathedral of the same name has been built and is dedicated to it. The icon is highly venerated in Lithuania and is often called “Lithuania’s greatest treasure”. The icon is painted in the Our Lady of the Way style, and is similar to the famous Madonna Salus Populi Romani.

There was a very pious Lithuanian nobleman named Petras Giedgaudas who had a special devotion for Our Lady. Giedgaudas was an advisor and a diplomat in the service of Vytautas the Great. It was he who built the first church in Siluva in AD 1457 and dedicated it to the Nativity – meaning the birth – of the Blessed Virgin Mary. In Rome, Giedgaudas obtained a beautiful icon of our Lady holding the Christ child, which he brought to the Chapel at Siluva, and he installed it in the Sanctuary there. Pilgrims walked to the Chapel at Siluva from all corners of Lithuania, Prussia and other neighboring countries for the Feast of the Blessed Virgin’s Birthday. It became a major Catholic pilgrimage site. In those days, a pilgrimage was a major act of penance and piety, and as Catholicism increased, pilgrimage increased in popularity.

In the 16th century the wars of the Reformation reached Lithuania, and Calvinism seized control of the area surrounding Siluva. But Catholic pilgrims continued to come to the Chapel at Siluva, even under increasing threat from the Calvinists. Seeing what was coming, the parish priest, Fr. Honas Holubka, gathered the important church documents, including the icon of Our Lady and the Child Jesus, sealed them into a metal box and buried them nearby. In an effort to crush Catholic piety, the Calvinists demolished the Chapel and leveled the ground. Years later local Catholics sought to regain legal ownership of lands seized, including the land the church was on, and were unable to do so because they had no documentation showing ownership.

Siluva, Lithuania, AD 1608; some 80 years after the church was demolished. Children shepherds and their sheep were on the land of the old church. They were suddenly transfixed by a vision of a weeping woman, standing on a rock and holding an infant. She did not speak; she was weeping. Then, she disappeared. One of the children ran to the local Calvinist catechist and told him of the vision of the weeping lady, and he was not believed. The other children all told their parents, and soon there was quite a commotion, and a crowd gathered at the place. The Calvinist catechist, and another teacher named Saliamonas also went to the place.

The vision appeared again – a weeping woman, standing on the same rock, holding an infant. The catechist asked her why she wept. She responded, “There was a time when my beloved Son was worshipped by my people on this very spot. But now they have given this sacred soil over to the plowman and the tiller and to the animals for grazing.” And again, she disappeared. News of this second apparition spread more quickly than the first, and soon the whole countryside was in an uproar.

News of the apparition reached the ears of a 100 year-old blind man, who fondly remembered Fr. Holubka, and who had participated in the burying of the iron-clad chest beside the large rock. The people led him to the site, and when he arrived there, his sight was miraculously restored. Giving thanks to God, he pointed out the spot where the chest was buried. The chest was dug up and opened, and it contained the large painting of the Madonna and Child, Chalices, vestments and many documents, including the original church deed.

The Lithuanian people began an immediate return to the Catholic faith, including many Calvinists in positions of authority. With the original deed to the land now in hand, the land was eventually legally returned to the Catholics in a court action finalized in AD 1622. A wooden church was erected on the site and pilgrimages commenced, particularly on the indulgenced Feast of the Nativity of Mary. More miracles began to be attributed to the icon in the Chapel. In AD 1775 Pius VI extended the celebration of the indulgenced feast from one day to an octave; eight full days. The image of Mary and Jesus was also adorned with golden crowns. The current Basilica of the Nativity of the Blessed Virgin Mary was dedicated in 1786.

In 1991 Cardinal Vincentas Sladkevicius and Vytautas Landsbergis, the Speaker of the Parliament, at Siluva, signed an act consecrating Lithuania to the Blessed Virgin Mary. On September 7 1993, the Holy Father John Paul the Great prayed in the Apparition Chapel and took part in a celebration of the Liturgy of the Word in the Basilica at Siluva.