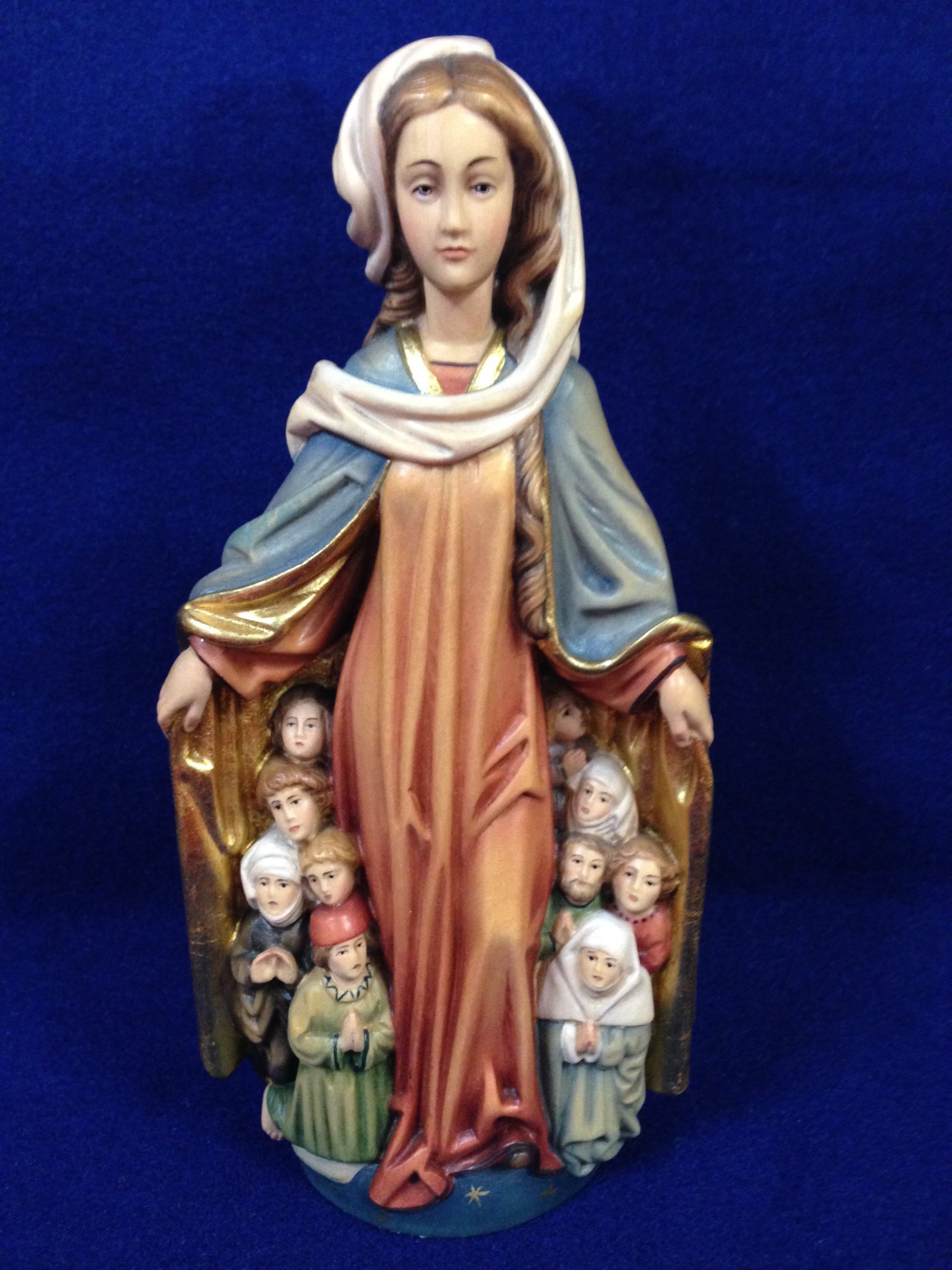 The image of the Virgin, generally standing, who shelters under her outspread mantle a group of the faithful in need of protection is probably derived from one of the provisions of medieval law. This conferred on women of high rank the privilege of granting to persecuted people who called upon their aid the so-called “protection of the mantle” – safe refuge and freedom from persecution. This motif is found in theological literature from the early 13th century onward, and it soon appeared in the plastic arts, emerging as a devotional image in the late 13th century and becoming widespread during the two following centuries. The religious aspect of this legally based symbol was applied not to the Virgin alone, as the most powerful of the intercessors before God’s throne, but also to other female saints such as St Ursula or St Odilia. The Cistercians and Dominicans in particular contributed, notably by accounts of visions, to the wide distribution of this image.

This famous Madonna of Mercy was originally attributed by art historians to the Ravensburg sculptor Friedrich Schramm, and is now unanimously considered to be the work of Michel Erhart of Ulm. The Virgin stands, tall and slender, on a grassy plinth. Showing movement only to the extent of a slight curving of the body, she protectively holds up her garment in the gesture of the “protection of the mantle”. Beneath it a large number of the faithful find refuge. Her elegant reserve and the nobility of her posture match the refined facial expression, emphasized by her strikingly slender throat. These features, together with the artistic framing of her face by the wavy hair falling to her shoulders and the shawl covering her hair, reflect Erhart’s endeavour to achieve in sculpture an idealized image of beauty, an effect further enhanced by the largely original polychrome colouring.

The image reportedly came from the high altar altarpiece of the Church of our Lady in Ravensburg, Upper Swabia, c. 1480, hence its name. It is 135 cm tall, of lime wood, still with its original colors and some over painting. It was purchased in 1850 by the Bode-Museum, one of the groups of museums on the Museum Island in Berlin, Germany. It is a historically preserved building, designed by architect Ernst von Ihne and completed in 1904. Originally called the Kaiser-Friedrich-Museum after Emperor Frederick III, the museum was renamed in honor of its first curator, Wilhelm von Bode, in 1956.