Our Lady of the Caridad del Cobre 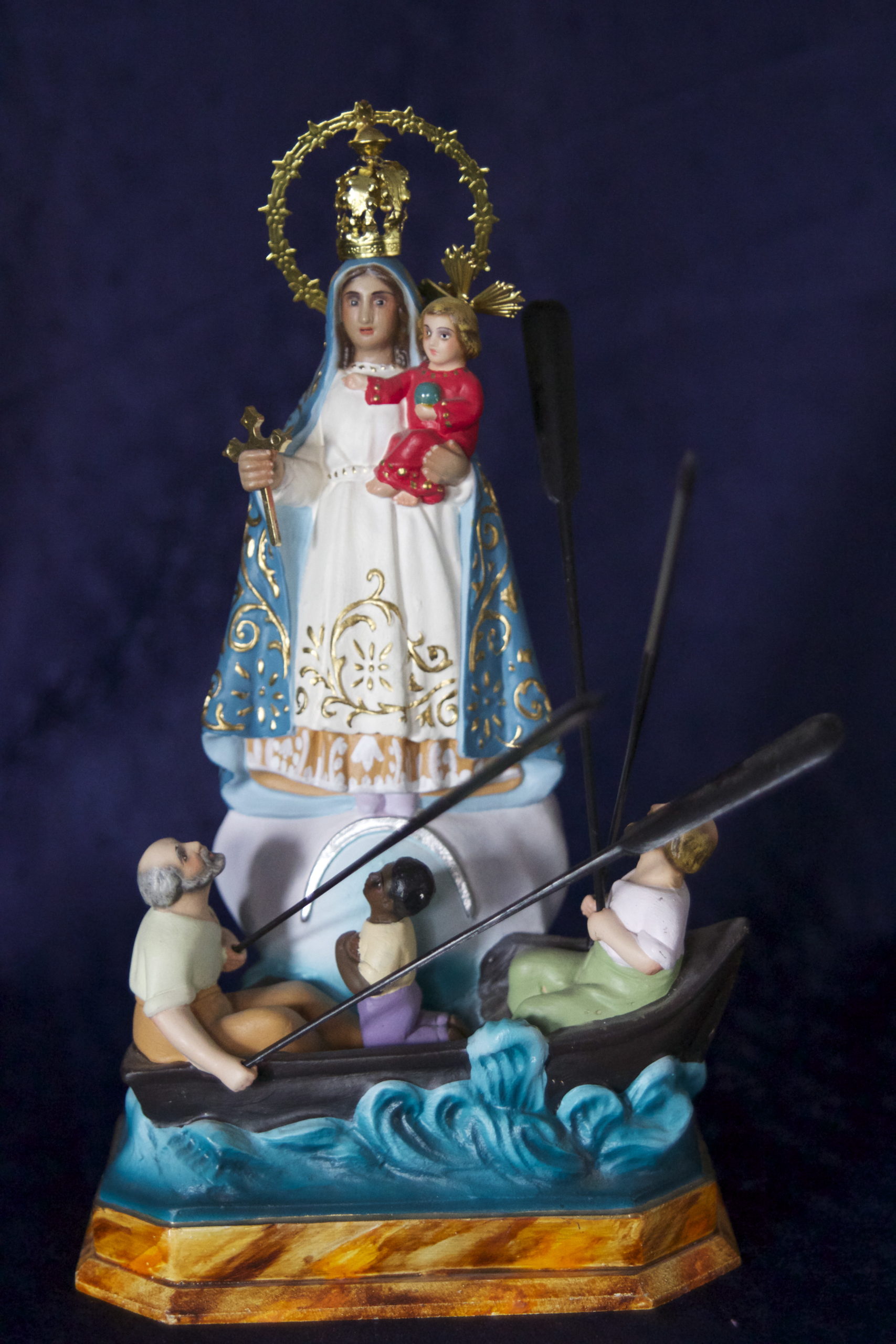 Our Lady of the Caridad del Cobre

The story behind the La Virgen de la Caridad del Cobre, began around 1608 (sometime between 1604 and 1612 depending on the source). Two brothers, Rodrigo and Juan de Hoyos, and their slave, Juan Moreno, set out to the Bay of Nipe for salt. They are traditionally called the “three Juans”. They needed the salt for the preservation the meat at the Barajagua slaughter house, which supplied the workers and inhabitants of Santiago del Prado, now known as El Cobre. While out in the bay, a storm arose, rocking their tiny boat violently with ongoing waves. Juan, the slave, was wearing a medal with the image of the Virgin Mary. The three men began to pray for her protection. Suddenly, the skies cleared, and the storm was gone. In the distance, they saw a strange object floating in the water. They rowed towards it as the waves brought it towards them. At first they mistook it for a bird, but quickly saw that it was what seemed to be a statue of a girl. At last they were able to determine that it was a statue of the Virgin Mary holding the child Jesus on her right arm and holding a gold cross in her left hand. The statue was fastened to a board with an inscription saying “Yo Soy la Virgen de la Caridad” or “I am the Virgin of Charity.” The statue was dressed with real cloth and the Virgin had real hair and skin of a mixed woman. Much to their surprise, the statue remained completely dry while afloat in the water.

Overjoyed by what they had discovered, they collected only a third of the salt they were supposed to collect and hurried back to Barajagua. They showed the statue to a government official, Don Francisco Sánchez de Moya, who then ordered a small chapel to be built in her honor. One night, Rodrigo went to visit they statue, but discovered that the image was gone. He organized a search party, but had no success in finding Our Lady of Charity. Then, the next morning, she was back on the altar, as if nothing had happened. This was inconceivable as the chapel had been locked. This event happened three times. The people of Barajagua came to the conclusion that she wanted to be in a different spot, so they took her to El Cobre. She was received with much joy in El Cobre, and the church there had its bells ring on her arrival. It was at this point that she became known as “Nuestra Señora de la Caridad del Cobre” or “Our Lady of Charity of El Cobre”. Much to the dismay of people in El Cobre, the disappearance of the statue continued to happen.

One day, a young girl named Apolonia was playing outside, pursuing butterflies and picking flowers. She went towards the mountains of the Sierra Maestra, where she came across the statue on top of a small hill. There were those who did and those who did not believe the little girl’s testimony, but in the end, the Virgin was taken to the spot of her discovery, where a church was erected for her. The story circulated around the island quickly.