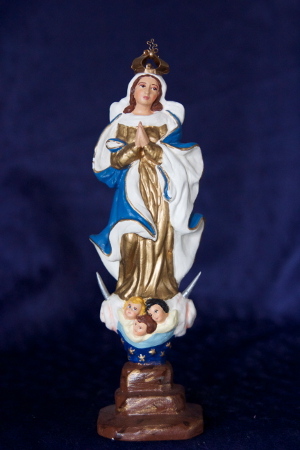 The small image of the Virgin of the Thirty Three is a wood carving originating in the missions that the Jesuits had in Paraguay in mid eighteenth century. The image was made in one of the Guarani workshops that flourished in these famous missions.

Around 1779 the image was placed in the chapel that the Jesuits looked after in the village of Pintado and later, when the entire village moved to what is now the city of Florida, the residents took with them the beloved image before which their ancestors had prayed.

On April 19, 1825, thirty-three Orientals, Uruguayan patriots, landed on the beaches of the Agraciada to commence the liberation of their country. When they reached Florida, they went to the small church and placed the future of the new nation at the feet of the Virgin. National Independence is proclaimed on August 25, and the members of the Constitutional Court having signed the Act of Independence, present themselves again before the image and place their nascent country under her protection.

Ever since, the natives have called this image La Virgen de los Treinta y Tres (The Virgin of the Thirty Three). On August 25, 1975, on the 150th anniversary of its independence, the Uruguayan nation officially declared this image of the Virgin and the church where it was venerated “Historic Monuments.”

The Virgin of the Thirty Three is thirty-six centimetres high. It is a baroque carving of the Assumption of the Virgin, whose cloak and robes seem to move because of their many pleats.

Since 1857, “The Liberator of Uruguay” has a gold crown with precious stones, a gift of the second leader of the Thirty Three, who later became president of the Republic. The disproportionate size of this crown – an extraordinary gold work – has become the distinctive feature of this Marian image.

The image was crowned canonically in 1961 by a concession of His Holiness John XXIII, who the following year proclaimed her officially “Patroness of Uruguay.”

The solemnity of “Our Lady of the Thirty Three” is celebrated on the second Sunday of November with a pilgrimage to her shrine from every part of the nation.